Skip to content
Six fifth year students were selected to take part in the LYIT handball tournament on 27th April. They had been trained in the weeks leading up to the tournament by past pupils Jack Friel, Keelan McElwaine and Jane Shiels.
Zoe Green was the overall winner of the girls competition. Oisin McBride was narrowly defeated in the final of the boys competition, while Brandon McClafferty won the boys shield competition.
Amy McGonigle was defeated in the girls semi final, while Amy Friel and and Daniel Heraghty were knocked out in the earlier rounds.
Overall, the competition was a great success and Mulroy College came out the most successful team out of the seven schools taking part. 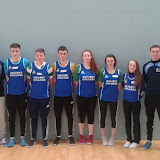