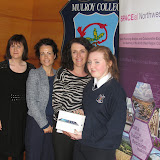 Orla Sweeney, 5th year, Mulroy College, being presented with the IPad Mini she won for participating, with her classmates, in a cross border geography training workshop called “Spaceial North West”, which was organised by Donegal County Council under the guidance of Ms. Mary Mc Bride, a former Mulroy College pupil who is now working in the research and policy unit in the County Council.  Orla won an ipad mini for logging into the system, navigating the site and sourcing different pieces of information. Loretta Mc Nicholas, Research and Policy Manager of the Community and Enterprise Section, Donegal Co. Co. presented Orla with her prize.  Also included in the photo is Ms. Fiona Temple, principal, Mulroy College and Breda Mc Gettigan, Orla’s geography teacher.

Orla wins an IPad Mini.
We use cookies to ensure that we give you the best experience on our website. If you continue to use this site we will assume that you are happy with it.OkNoPrivacy policy