The Mulroy College Senior girls’ soccer team advanced to their 3rd straight FAIS Senior b Final on Tuesday courtesy of a 3-1 win over East Glendalough from Wicklow. The Leinster champions were guided by Milford native and Finn Harps legend John Gerard McGettigan making the victory for Maria Ryan Carr’s team an extra special occasion in a game that was played at Gortakeegan in Monaghan town.

Mulroy led 2-0 at the short whistle courtesy of goals from the hard working Caoimhe Walsh and Nicola Devenney. Irish international Zoe Green gave the Milford girls a 3-0 lead six minutes into the second half to all but seal their place in the final before a consolation goal for the Leinster outfit midway through the second half.

The ulster champions Mulroy started the game with  a high tempo and Thea Duffy almost gave them  a dream start after 6 minutes when she ghosted into the back post to meet Zoe Green’s deep cross but her half volley effort whistled just wide of the upright. Four minutes later Leah Duggan thought she had given Mulroy the lead only to see her well struck shot after being teed up by the industrious Caoimhe Walsh come back off a post and cleared to safety. The Milford girls had a scare at the other end on 14 minutes when the dangerous McGettigan (daughter of John G) ran through but she was forced wide by Clare Friel and her effort drifted wide. Mulroy took the lead on 17 minutes after a good interchange down the right between Thea Duffy and Siobhan Sweeney saw the ball played into Caoimhe Walsh and after side-stepping a defender she let fly from 25 yards. The Glendalough net minder got a hand to the ball but could not keep it out. Mulroy continued to press forward and the dangerous Nicola Devenney came within inches of doubling the lead on 28 minutes when her goal bound effort was cleared off the line after neat play from Catherine Grier. Devenney got her name on the score sheet and doubled Mulroy’s advantage on 34 minutes when she was rewarded by chasing a long ball in a foot race with the keeper, Devenney got the first touch which the keeper couldn’t hold and her persistence paid off as she stroked home into an empty net to give the Milford girls a 2-0 lead at the break.

The Milford girls were determined to continue their dominance in the second half and they immediately put the Wicklow girls on the back foot with  a couple of half chances before a good exchange between Green and Amanda Callaghan saw Green try her luck from 20 yards. Once again the Wicklow net minder had difficulty with the high ball and Mulroy’s third goal was the killer blow to the Glendalough hopes of a second half comeback. Mulroy could afford to take their foot off the pedal a bit at this stage but were made to pay on 60 minutes when the Wicklow girls registered their only score with a powerful header from a corner. Caoimhe Walsh came closest to adding to the Mulroy tally with two excellent efforts landing just wide of the posts. The Mulroy defence was excellent throughout while they dominated the midfield exchanges and had two willing worker’s up front.

They advance to a final meeting in two weeks’ time against holders Passage West, Cork or Foxford, Mayo who meet on Thursday in the other semi-final in Ennis. 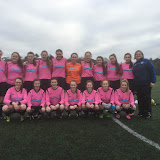